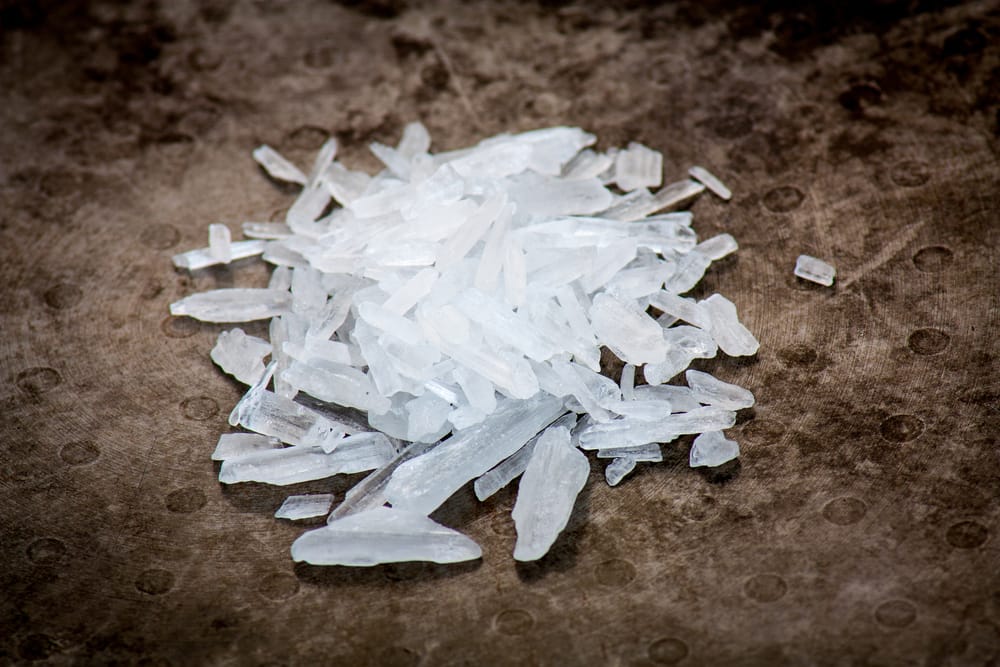 How Long Does Meth Last?

A methamphetamine “Crystal Meth” high is an intense, lengthy altered state of mind that can have devastating effects on the mind and body. If you’ve ever wondered, “how long does meth last?” or “how long does a meth high last?”, the answer is that both of these things can vary based on a number of factors. How long meth remains active, traceable, and relevant within the body depends on several factors including the individual’s age and size, their drug use habits and history, and their chosen route of administration, each of which results in a different half-life. Here, we address the numbers and apply them to your average chronic user: someone who smokes meth regularly, at least several times per week.

Meth is a stimulant. It speeds the body’s natural systems up and delivers high levels of dopamine to the user. Meth comes in a variety of forms, including crystals and powder. Over time, frequent users will build up a tolerance to the euphoric effects of the drug. Eventually, many users will resort to binging this drug, to keep feeling the same level of highs, generally resulting in a dangerous dependency and a number of physical and mental drawbacks that can be life-threatening.

Meth is a synthetic drug that often contains cold medicine, but can consist of much more sinister ingredients, including rat poison, antifreeze, battery acid, and drain cleaner. These ingredients can have worrying long-term and short-term effects on a user’s mental and physical health, including:

Additionally, it’s possible to overdose on meth, which can result in death. Due to the addictive nature of this drug, individuals with meth addictions require meth addiction treatment to recover. Those who need to take a drug test or know people who use meth may have a couple questions, including how long does meth last in the body and how long does a meth high last?‍

How Long Does Meth Last in the Body?

How long methamphetamines last really depends on a number of factors:

The duration of action really depends on the individual, their history of drug use, and the dose administered, but generally, concentrations of meth are detectable in the blood roughly three hours after an oral dose. Around the 12th hour, the body is working its hardest to metabolize the meth.

Duration Of the High

A methamphetamine high is often described as a longer-lasting cocaine high. The precise length of a crystal meth high is a subject of debate amongst experts. Some researchers state that the stimulant effects of the drug can last approximately 6 to 8 hours. A National Institute of Justice report states that they can last 12 to 14 hours or longer. Other sources report that the high can last up to 24 hours.

How Long Does a Meth High Last on a Binge?

When smoked, Meth detectable for eight hours to one day in plasma, four to seven days for urine, and approximately 90 days in hair follicles. A meth high is progressive, and once it slows, addicts feel compelled to take more meth. The sense of confidence one feels when high makes it easy to smoke more and more without caution. Below, we’ve outlined what is referred to as a binge cycle.

Shoulder; 1 hour – Euphoria is lessened, but other effects are sustained.

Normalizing; 2-7 days – Although the characteristics of crash persist, the user is on the upswing.

As the effects of meth start to wane, dopamine will drop below normal levels, making users feel worse than before they began and resulting in a “crash” or “comedown”. Comedowns are characterized by a period of exhaustion, due to the body being drained of energy.

What are Some Meth Comedown Symptoms?

Meth users experience a large burst of energy, which causes the body to think it has an abundance of energy. This misconception results in the user ignoring sleep and engaging in excessive activities. When the energy is depleted, it causes a “crash” that results in a period of extreme exhaustion. Many users then try to chase the feelings of energy and increased euphoria by taking more meth. As the user takes more meth to avoid a comedown, their bodies become even more stretched and exhausted.

Symptoms of a meth comedown include:

When recovering from a methamphetamine binge, users will often need to sleep for extended periods, up to 3 days, in serious cases. To completely get over the short-term effects, recovery can take even longer, sometimes up to 7-10 days. The “comedown” period is one of the most dangerous periods for a meth user. Thoughts of self-harm and the need to use again can be powerful forces and cause the user to spiral into a cycle of substance abuse and binging.

Getting Help for Meth Addiction

Getting help for an addiction to methamphetamines is a crucial step in the healing process. Meth is an extremely addictive substance, and for many, it can be nearly impossible to break the cycle on their own, especially in the short and long-term.

We provide a state-of-the-art meth addiction recovery program that can help you and your loved one overcome their addiction for good. We can guide you through the recovery process and build the foundation to resist meth addiction and live a happy, healthy life. Call or fill out a contact form to get started today.